How to Plan an Amazing Virtual Holiday Party

If your organization is like ours, you’ve been working hard all year and your people are ready to unwind.

We’re with you. It’s been a long year and you deserve something FUN.

As the VP of People & Culture, I tend to be pulled in many different directions. But one of the most enjoyable parts of my job is when our team gets to dream up ways to celebrate our people and their successes.

And we did just that recently with our first-ever company-wide virtual Halloween party. While this can never replace doing it the old-fashioned way, a few creative ideas helped make this a brand new tradition, one that left smiles on our employees’ faces.

Why should you plan a virtual holiday party for your employees?

Our team events have long been considered iconic and get mentioned a lot on Glassdoor and Indeed reviews. (But we’re not all just party animals, promise. )

The reason they’ve been so impactful is that our people have always had a visceral need to connect across teams and offices. With our workforce being mostly under the age of 40, we’re full of young professionals and families who have oodles in common.

When we had to cancel our annual Summer Retreat due to COVID-19, we got lots of sad responses. It became clear that simply ‘cancelling’ everything this year wasn’t going to cut it. 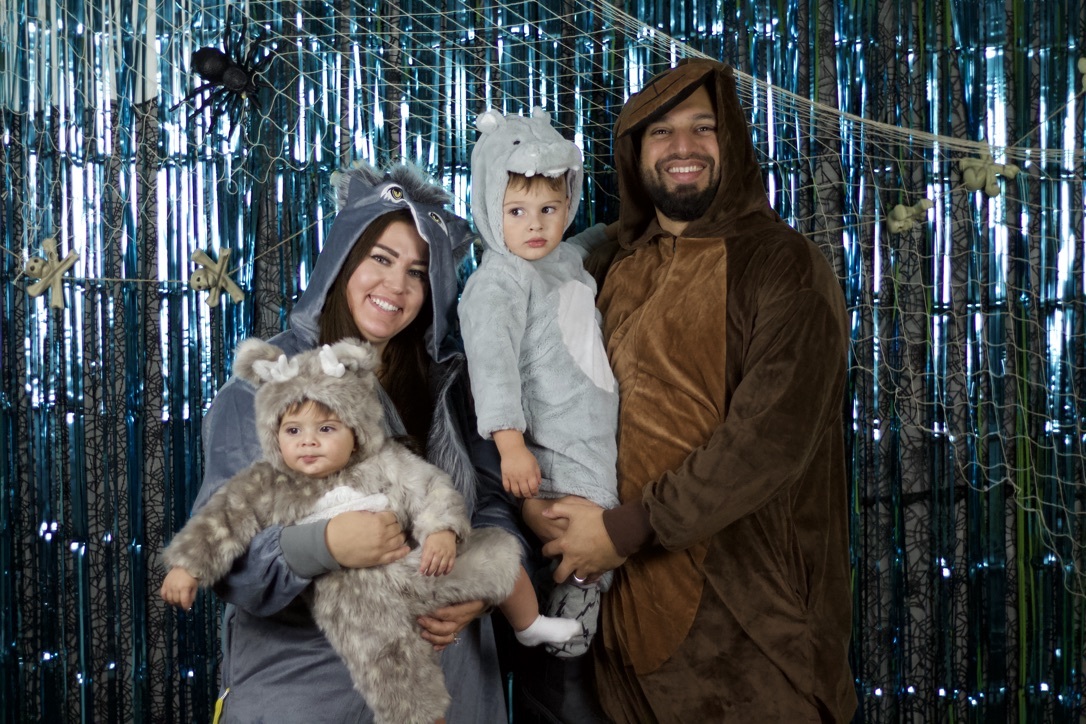 How our Halloween celebrations looked before 2020

After surveying employees and chatting one-on-one we learned that it’s never been the entertainment or food or speeches that made our parties great.

It’s always been about connection.

With that in mind, we started brainstorming: if we can’t give people an in-person experience, what could we do to facilitate that connection that’s so easy to get from an in-person event?

If we can’t be physically in the same place together, what can we do as a company to make our employees feel more connected while working from home?

This is how our ‘in-home’ holiday party experience was born.

How we make virtual events awesome

If you’ve tried it before, you’ll know that taking an in-person event and just moving it online doesn’t quite have the same impact as the real thing.

So we knew that instead of just trying to replicate parties we’d had in person we needed to commit to creating new experiences in-home for our employees to connect.

But we also had to acknowledge that these new experiences might not look the same as what we were used to in-person:

We also had to acknowledge that the world is a different place than it was when we had our last holiday party. A lot has happened. There’s a lot on everyone’s minds and in isolation, it’s extremely difficult to foster feelings of community.

That’s why, we wanted to make sure that where possible, we were supporting small, Canadian-owned businesses.

We know that this year some companies are thriving, but many aren’t. So making sure that we made as many purchases for party supplies through local businesses as possible was important to us.

In isolation, it’s easy to lose our sense of community. By connecting our employees to local businesses, it helped to remind us that we really are all in this together, and we are a community.

Now, with all that in mind, let’s get into how we pulled it all off.

The details below cover how we planned our virtual Halloween party, but feel free to steal these ideas and adapt them for whatever holiday event you’re planning!

Our goal was to get as many employees as possible to attend the party and to make sure everyone had a great time.

To build hype around the big day, we launched a competition on our Slack space for the spookiest username, thanks to a couple of clever employees who took the initiative and revived this contest from previous years.

Everyone re-named themselves on Slack to something still recognizable, but Halloween-themed. For instance, Adam became Adam’s Family; and Tom became Tomb.

All names had to be locked in the day before the party and winners would be announced during the festivities.

This was a fun way to get people excited about the party and show off our creative chops.

And on the week of the party everyone was delivered a large box that they were instructed NOT to open.

We had everyone share pictures when they received their boxes to build the excitement.

We kicked it all off with a team photo on Zoom.

People had some awesome costumes (and in cases, filters):

When it was party time we had everyone on screen to do our surprise unboxing together. The anticipation was killing everyone and waiting to open them all together was totally worth it.

Inside the box were a variety of exciting things, but the most popular were definitely the treats.

Whether we’re working from home or in the office, snacks are the Staffbase team's universal love language.

But getting delicious, thoughtful snacks to all 100+ employees (some with allergies and other food preferences) was not easy.

That’s why we partnered with a lovely Canadian company called Foodiepages, who curated delicious, Halloween-themed snacks for our people—and delivered them right to their homes!

When we weren’t stuffing our faces with candy, we were participating in a couple of fun activities.

Since it was Halloween, pumpkin carving was a natural fit.

Inside each surprise box, we supplied pumpkin painting and carving sets.

But it wasn’t a complete surprise. Earlier in the week, we instructed employees to buy a pumpkin and expense it (up to $25). Knowing that some employees weren’t comfortable going to the store because of COVID-19, we decided to include mini plastic pumpkins in the box so that everyone could participate, regardless of their situation.

Instead of having everyone on screen at the same time, which is pretty impersonal, we had everyone in breakout rooms so while they painted or carved their pumpkins they could chat with their colleagues.

We also knew that some people were shy and may have never spoken to the colleagues they were paired up with before. That’s why we gave discussion prompts like, “What’s your favorite Halloween candy?” or “What’s the best costume you’ve seen?” so we could get the conversation flowing.

We also gave them regular updates on how much time was left.

Prizes are a great way to keep people engaged and invested in activities that they are doing alone at home.

Our most notable prize was a burrito blanket. It was a hit.

Next, we awarded prizes for the best pumpkin carvings and paintings that everyone had been working on in the breakout rooms.

We had prizes for:

To make sure everyone’s pumpkins got a chance in the spotlight, our CMO hosted "the fastest show-and-tell ever” of all the show-stopping pumpkin designs.

We used the ‘spotlight for everyone’ functionality in Zoom and asked that employees stay off mute so we could hear all the reactions, which made everyone feel like we were all together.

And wow, was it ever a best in show! There were some truly awesome pumpkins, which shouldn’t be surprising given how many amazing creative people we have in our organization.

The biggest struggle with virtual events is attendance and engagement. But we nailed it.

In our post-event survey, employees said they loved the surprise boxes, but didn’t love spending that length of time on Zoom, especially the length of the breakout sessions.

So here’s how we’re going to keep learning and improving our virtual parties:

What we would do again:

What we will change for next time:

With all that said, for a company that is known for its in-person events, creating a curated in-home virtual party wasn’t a small task. It took a team of dedicated employees to make it happen. Each person played a vital role and we can’t thank them enough!

We hope this gives you some ideas for your first (or next) virtual holiday party! Share your ideas with us on Twitter to keep the inspiration flowing - tweet us @StaffbaseHQ.